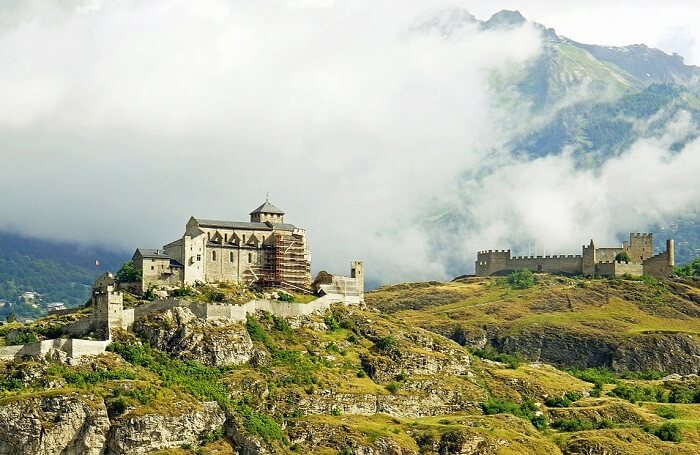 The very mention of a holiday in Switzerland is enough to send many into deliriums of ecstasy with the flurry of panoramic images that comes with it. Be it the craft beer and castles, new-age restaurants and waterfront bars, swimming in the Rhine or Limmat, and hiking on the snow-clad peaks, things to do in Switzerland are endless. But nothing gives you more insight into the grandeur of the country’s history and culture like the castles of Switzerland.

So let’s take a look at a list of castles in Switzerland that you definitely shouldn’t miss out on your next trip there. 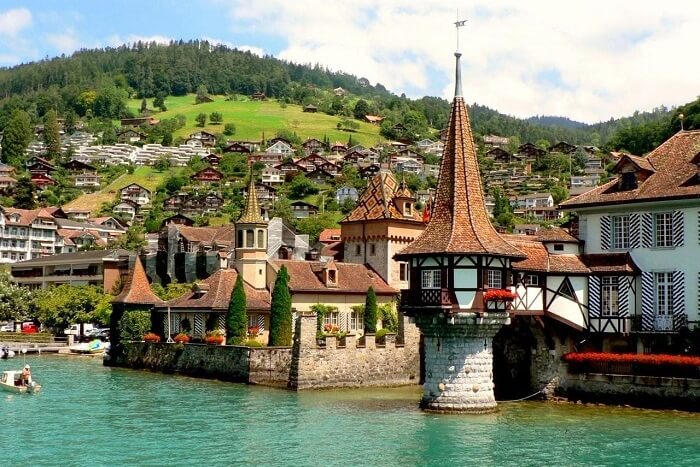 Step back into the 16th to 19th centuries as you walk through the grandeur of the Oberhofen Castle, that stands perched on the shores of Lake Thun. The oldest parts of the turreted castle date back to 1200 AD, its grand white spiral jutting out on to the lake in the Swiss canton of Bern. Murals and Romanesque frescoes dating back to the 13th-15th century adorning the chapel and the Turkish smoking parlor shouldn’t be missed. 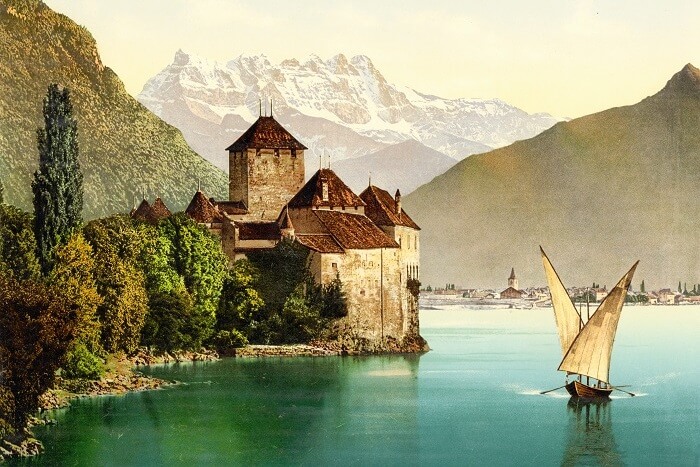 The Chateau de Chillon is probably the one of the most famous castles in Switzerland.Steeped in history, the Chillon Castle stands on the rocky outcrop on Lake Geneva, surrounded by water on all sides that make its natural moat. Having served as the official residence during 12th to 16th century, the Counts of Savoy controlled the passage of ships back then on Lake Geneva. The stunning Gothic architecture exhibited in the dungeons of the castle, the grand ‘Courtyard of Honour’, the chapel and sleeping quarters of the erstwhile noblemen hold vestiges of its grand history. 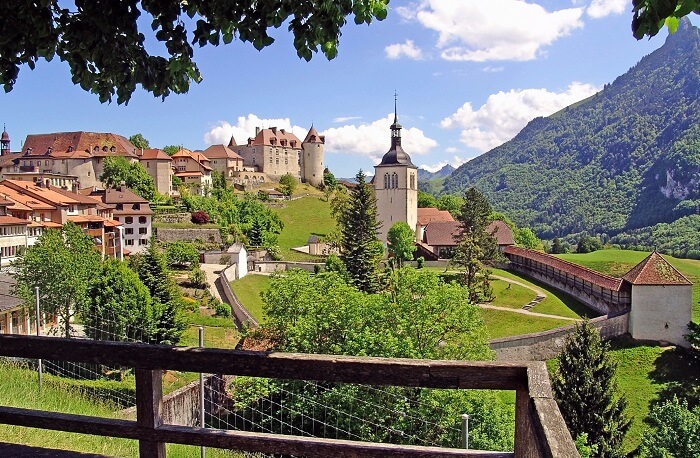 Visiting Switzerland, you may have the idea of sampling its famous cheese fondue in mind. While the medieval town of Gruyeres Fribourg is renowned for the same, make sure that you visit the stunning Gruyere Castle as well. Built in the 13th Century and passed on to several noble families, this picture perfect castle houses historical treasures including capes belonging to knights of the Order of the Golden Fleece. Marvel at the bespoke frescoes created by the Ancient Regime, paintings, and decorations created by the 19th century artists as you explore the castle’s ramparts and its French gardens.

4. The Castles of Bellinzona 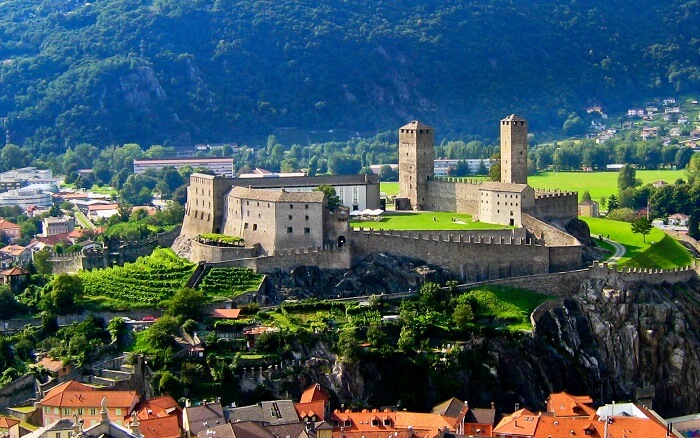 Ticino’s capital city Bellinzona is much famed for its three majestic castles known as the Castello Montebello, Castello Sasso Corbaro, and Castelgrande. Castelgrande is the oldest and most impressive of the three, built in the 13th century, while the other two are the best preserved medieval castles in Switzerland. Forming a ring with fortified walls (little of which remains today), the three castles that played a prominent role in the protection of Bellinzona has been declared as UNESCO World Heritage Site today. One can enjoy a stunning view of the entire city from the castle Sasso Corbaro. 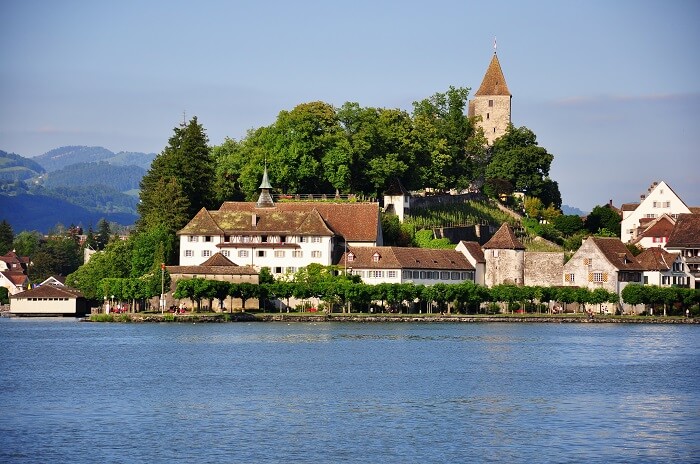 Perched on the shores of Lake Zurich, the lake waters surrounding it on three sides, the Rapperswil Castle is one of the most beautiful castles near Zurich, Switzerland. This castle houses the Polish Museum where the history of Swiss-Polish relationships is displayed along with story of Nobel prize winner Marie Curie-Sklodowska amongst others. A walk along the medieval wall and the parapet towards the castle offers a splendid view of the ‘City of Roses’.

Standing tall on the peak of a rocky mountain, the Tourbillon Castle overlooks the astonishing vistas of the Sion. It is an arduous trek along a winding path that takes you to the castle, which houses a museum exhibiting pieces of historical importance. The interesting fact remains that though the castle was laid to ruin by a huge fire in 1788, its 15th century chapel ornamented with frescoes survived the destructive blaze. 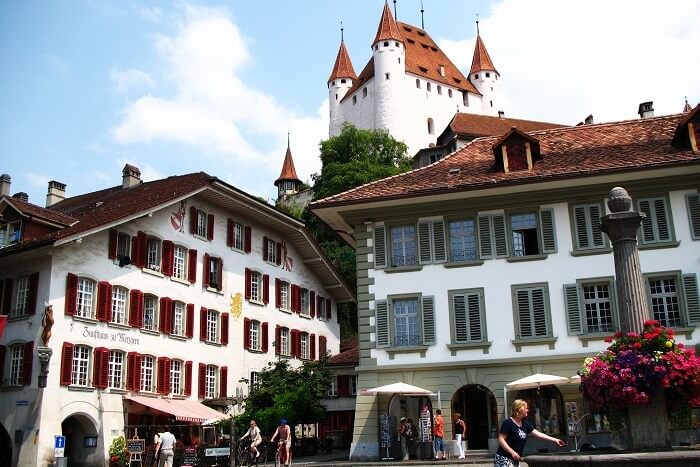 Of all the castles in Switzerland, the Thun Castle near Lake Thun offers the most stunning view – of the Aare River. The tower of Knight’s Hall that was actually built in the 12th century is one of the most outstanding features of Thun Castle. One can tour all of its five floors including a prison that was built in 1886. 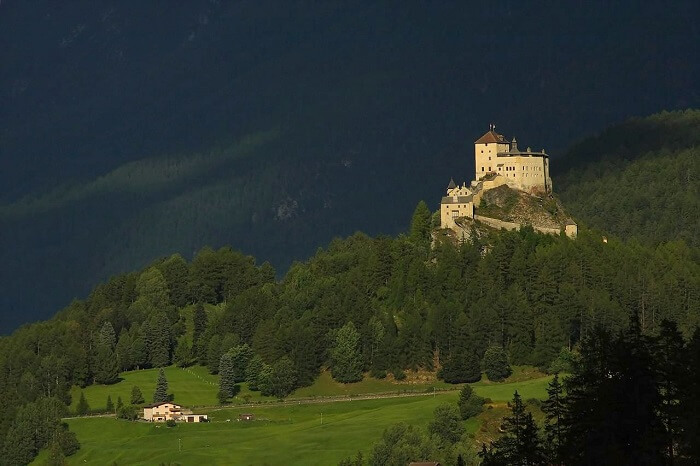 Known to be the most imposing castle in Graubunden owing to its location atop a 100m high rock, Castle Tarasp dominates the locality in Upper Engadine. Sweeping views of pristine Lake Tarasp, the Alpine Mountains and of Lower Engadine region can be enjoyed from the castle grounds. Scheduled tours would take you through the beautifully restored rooms, the chapel, grand halls and the famous organ with 2500 pipes preserved within this 11th century castle.

Timings: Tours to be scheduled after coordination with the castle administration 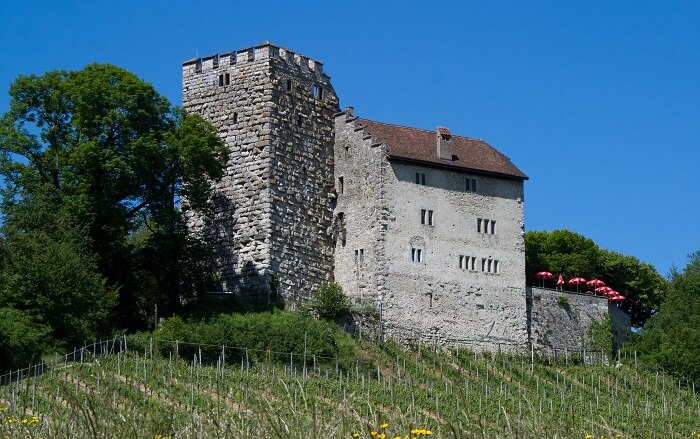 With the oldest foundations laid 1000 years ago, the Habsburg Castle is a treasure trove of the Habsburg Family memories that has played an immense role in shaping the European history. Six audio stations give you a documentation of the rise of Habsburg Dynasty, while a round tour of the castle premises offers you splendid views, and culinary delights in the historic setting as well. It would also be a delight to spot the reason why this castle is Switzerland is referred to as ‘double castle’. 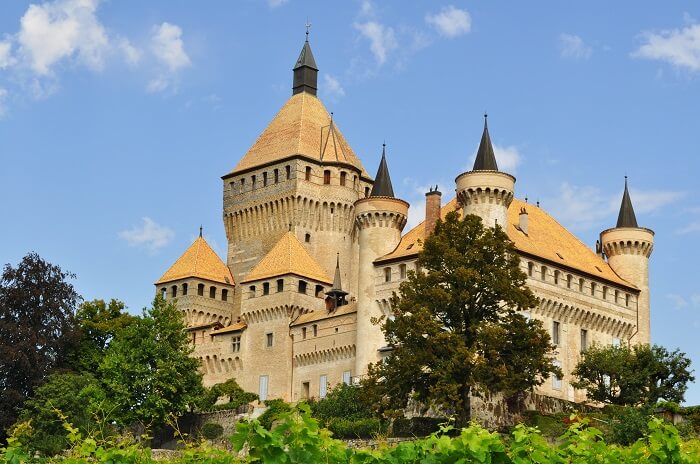 This 15th century castle is best known for its fairy-tale grandeur with its central tower that makes a magnificent sight along with Lake Geneva and Mont Blanc from the Vufflens Vineyard it is nestled in. Although visitors are not allowed within the privately owned mammoth castle, a 30 minute walk in the Vufflens Vineyard would be a treat to the eyes.

TOP 10 THINGS TO DO IN GERMANY

1. Walk Around the Brandenburg Gate, Berlin Once it stood within a divided city, a shadow between east and west that stretched up into the sky. Now of course, the silhouette still stretches but it functions neither as a gate (it’s former function) nor blockade but instead as a tourist attraction. It’s possible (encouraged in […]

THINGS TO DO IN: SORRENTO

Perched high above the Bay of Naples on the Sorrentine Peninsula, Sorrento is one of the most scenic and beautiful coastal towns in Italy. With the scent of lemon trees and olive groves almost everywhere, and beautiful Renaissance architecture, Sorrento is a postcard picture. As a gateway to the Amalfi Coast and the island of Capri, you can easily get around […]