Pompeii Ruins: Everything You Need To Know About This Historic Gem In Italy 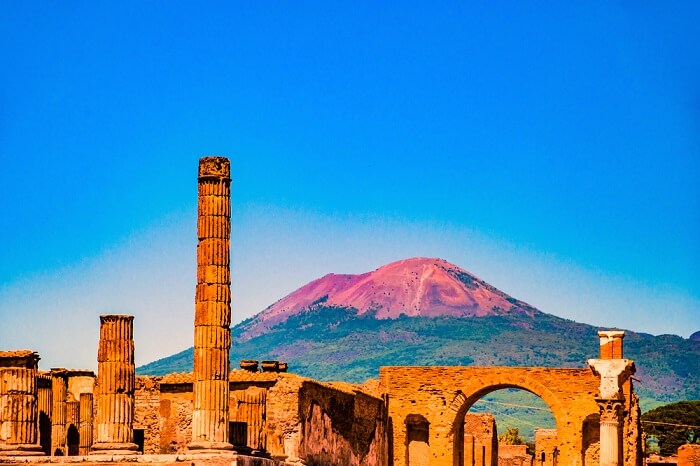 If you’re a looking to travel to Italy, then visiting the Pompeii Ruins is a must. Italy is not just known for its finger-licking food, but its captivating architecture too that is bound to leave you in awe. Pompeii, once filled with luxurious villas, small shops, and one-of-a-kind temples, is now a world-famous historic site, visited by tourists from across the globe.

Located near the south of Naples, Pompeii was tragically destroyed by the eruption of the Vesuvius volcano in 79 A.D. The entire city and its surroundings were buried under volcanic ash, preserving the city for 1700 years. These ruins have been a go-to destination for over 250 years, and today it is a UNESCO World Heritage Site!

Here is a short travel guide inclusive of travel tips and some of the famous places to visit during your trip to the Pompeii ruins in Italy. 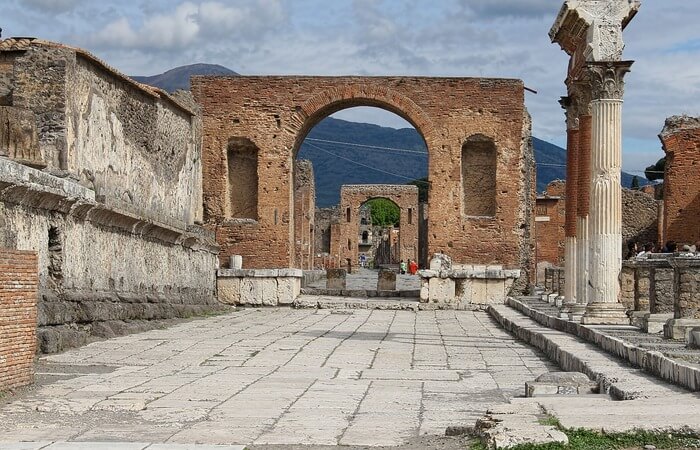 The perfect time for sightseeing at the Pompeii ruins would be between mid-March and the starting of June. The weather around this time is pleasant, dry and warm, making it comfortable to travel and easy for you to visit the sites, as any Pompeii Ruins’ guide would suggest.

How To Reach The Pompeii Ruins 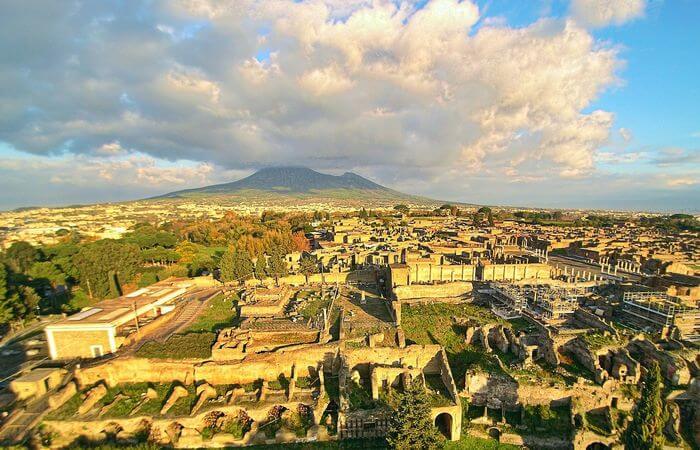 By Air: The Naples International Airport, is located in the Capodichino region of Naples, which is about only 7 km away from the city’s center making traveling to the Pompeii ruins, a breeze.

By Road: Pompeii ruins are located close to Naples, Rome and Sorrento and can be easily accessed by road from these places.

By Train: Since Pompeii is surrounded by cities, it is also easy to reach by train from Rome’s Napoli Centrale Station and a few other train lines which travel back and forth from the site. 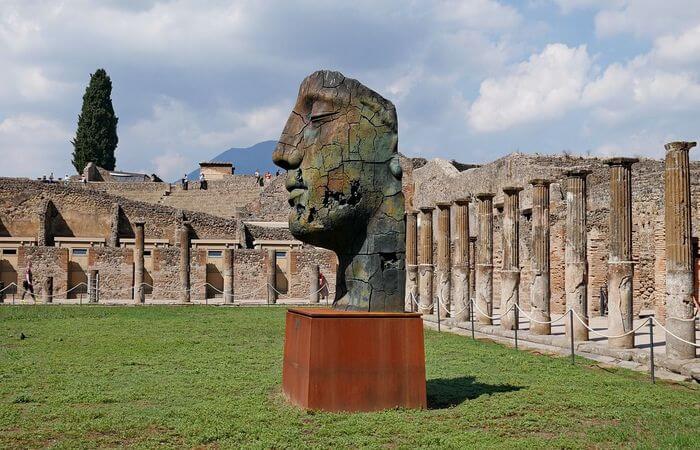 In order to avoid waiting in line at the ticket booth, you can choose to order your Pompeii ruins tickets online, and also book tours in advance through the website. Admission is also free during the regulars hours of the first Sunday of the month for any visitor. Keep in mind to carry cash along with you during your visit to the Pompeii ruins, as the ticket office doesn’t accept any credit cards.

You must not miss a visit to these fascinating Pompeii ruins that people come to see from far and wide. 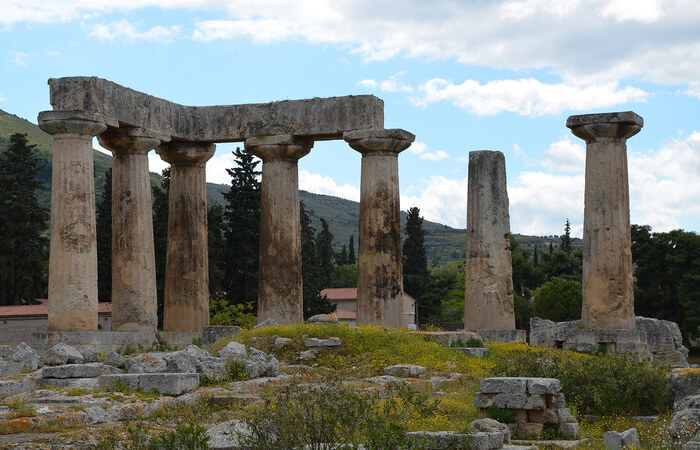 Take a stroll and witness the oldest structure still standing in Pompeii, the Temple of Apollo which faces the city’s Forum, showcasing the different changes adapted in architecture starting from the early 6th century B.C., till its destruction in 79 A.D. You can also pay the National Archeological Museum of Naples a visit, and admire the grand bronze statues which use to once adorn the Temple of Apollo. 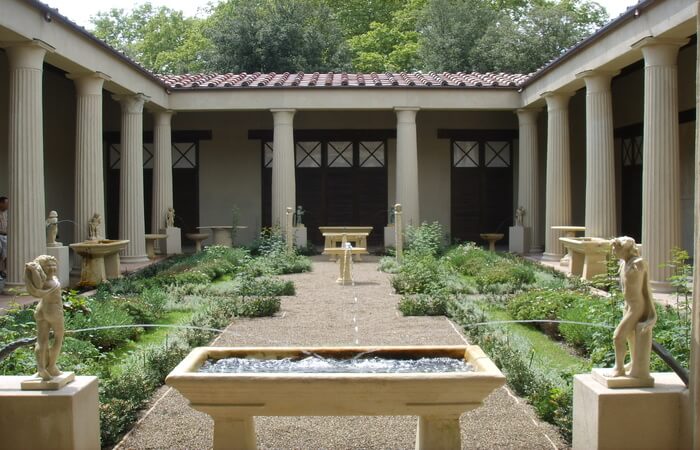 The House of Vettii is situated in the western part of the Pompeii ruins, it also one of the best- preserved Roman villas. The villas feature beautifully painted frescoes on a black background which were prized possessions of wealthy merchants who once resided in Pompeii. These villas were specifically designed to pamper and impress the guests and residents designed around an inviting courtyard enclosed with magnificent columns, water-spouting statues, sculptures, basins and fountains. 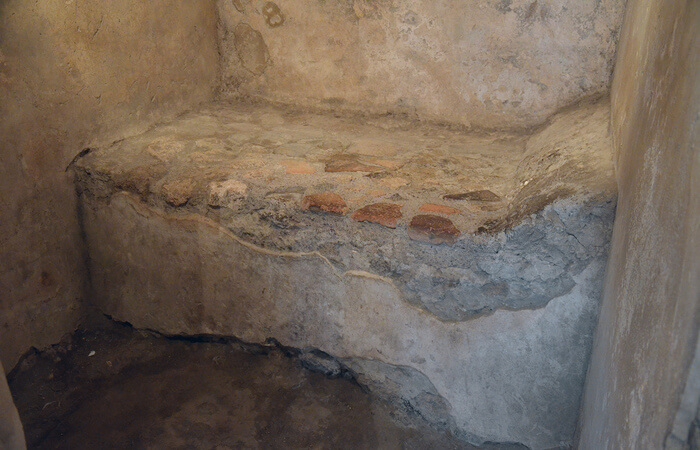 Lupanar of Pompeii is also known as the Lupanare Grande, it is one of the largest of the city’s brothels. It is located east of the Forum and features 10 rooms where there are brick platforms with mattresses that once acted as beds. A few of the rooms in Lupanar are showcased with wall paintings that depict sexual scenes, which were considered to be a sign of dialogue, giving it its unique significance in the history of Pompeii.

4. House of the Tragic Poet 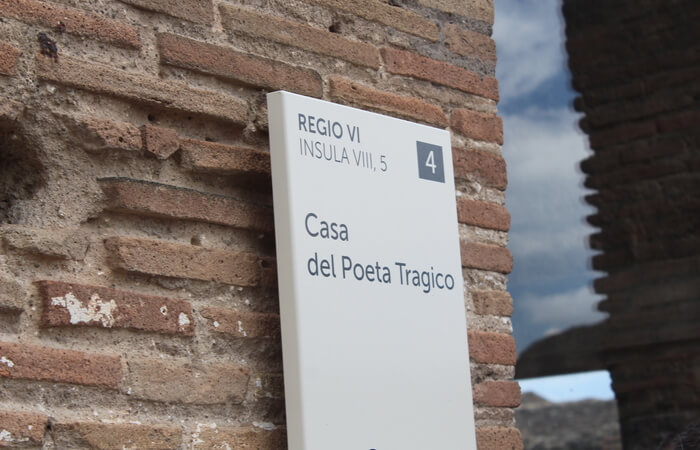 Located in the west section of Pompeii, this house is known for its beautifully painted frescoes and mosaics. This was the house of an important poet or writer who once resided here. The house has beautiful mosaics on the floor and also grand frescoes that are surprisingly big for the size of the house. 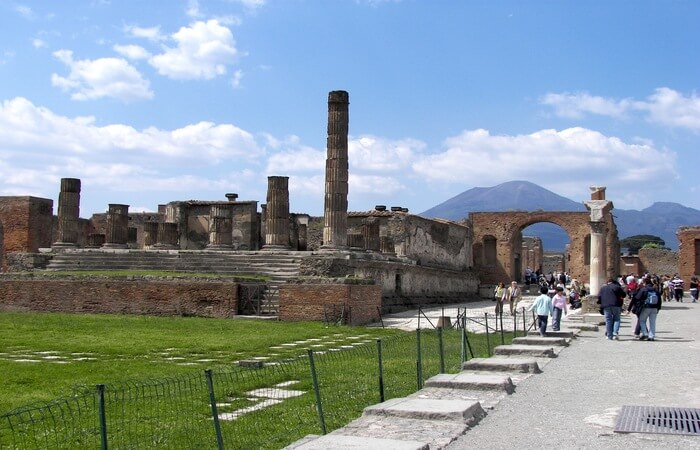 An expansive open area shaped like a rectangle, served as a market, commercial area for the city’s political and commercial crowd. The Forum of Pompeii also housed a court, bathhouses and temples. This grand scale of space is still remarkable and it is easy to imagine the bustle of activities which occurred where the city once stood in all its glory.

6. House of the Faun 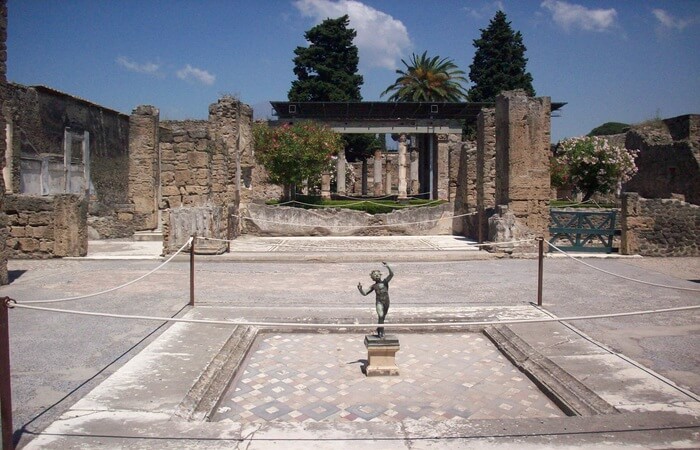 The famous House of the Faun received its name after a beautiful bronze statue of a faun. It is still one of the largest villas in Pompeii and takes up an entire block. This house holds some of the historic structures of Italy such as the Alexander Mosaic, depicting the great ruler Alexander the Great preparing against the battle with Darius III of Persia. This house features some of the most compelling artwork located in the Pompeii ruins. 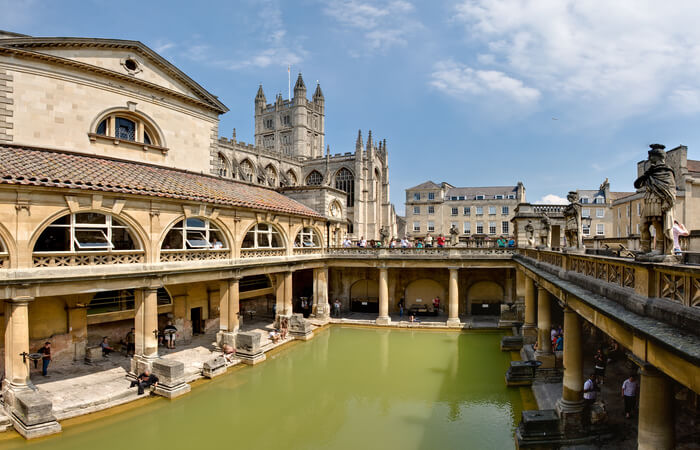 Public baths were a common feature across the Roman Empire, and a great place for people to meet, bathe and catch up with friends. Some of the houses had private baths, and a few were open to every social class, including slaves. The men and women always had separate sections for bathing. The beautiful baths were also elaborately decorated with intricate carvings on the ceiling. 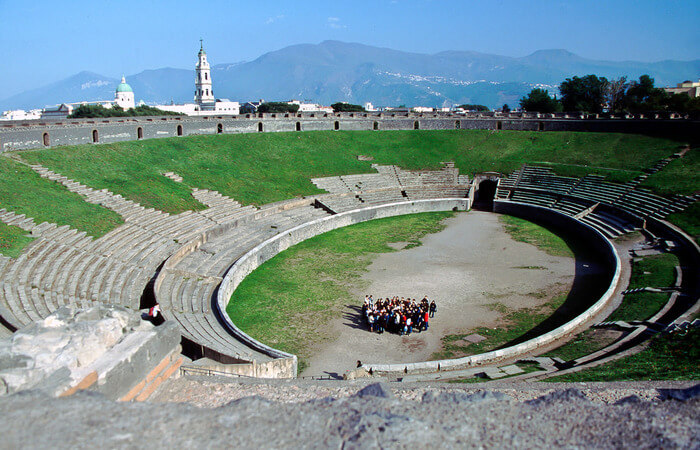 See the spectacular amphitheater of Pompeii that was built around 70 BC, and is considered one of the oldest structures still surviving in the world. This magnificent amphitheater was built out of stone and was a century before the Colosseum in Rome was built. 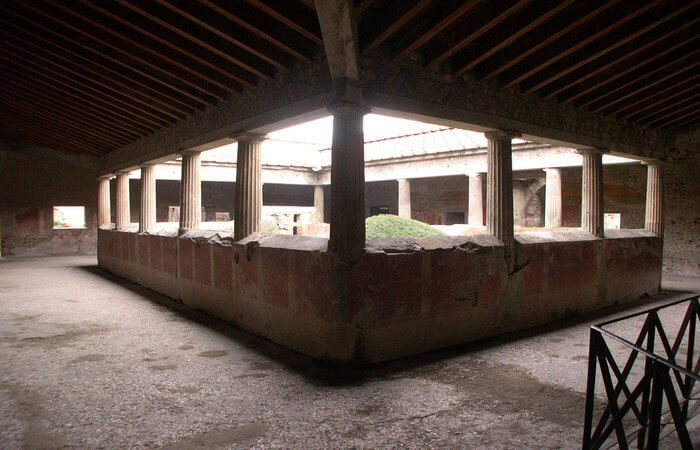 Villa dei Misteri, also known as the Villa of the Mysteries features beautifully preserved frescoes that adorn the walls against a beautiful red background. This Roman Villa shows a woman that is being initiated into a forbidden cult of Dionysus, known as Bacchus – the God of decadence. These paintings have been executed meticulously with its detailing and craftsmanship, the outdoor terrace and thoughtfully designed rooms just give you a sense of luxury. 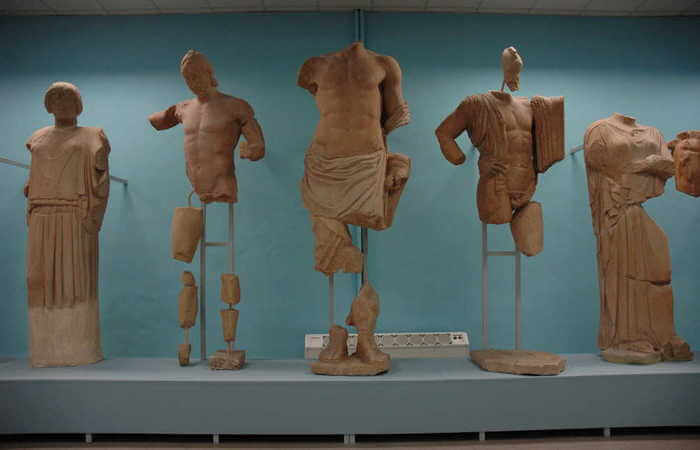 The residents of Pompeii who weren’t able to flee before the eruption were buried entirely by hot ashes falling from the sky. Giuseppe Fiorelli used a technique of filling the empty spaces of where the corpses had decomposed with liquid plaster, to reveal the perfect casts of the victims of the eruption in the Pompeii ruins. The “Garden of the Fugitives” has the largest number of plastered corpses of the victims during the eruption.

What To Pack For A Trip To Pompeii Ruins? 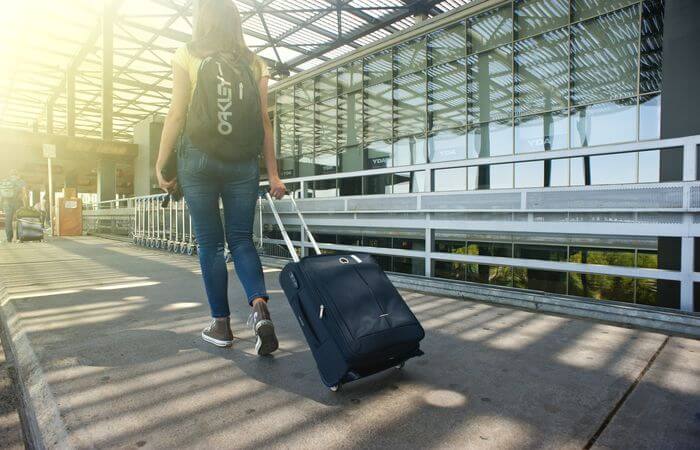 Since the site is exposed to the sun entirely and has very limited shade, it is best to come prepared with sunscreen, water bottles, hats, and sunglasses to keep cool. In case you miss them, they can be bought at the small town shops located near the Pompeii Ruins. The Pompeii maps are also easily available along with handy audio tour guides to help you understand the history of the Pompeii ruins in Italy.